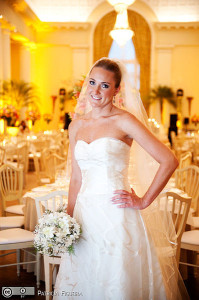 A new survey has revealed that only 18% of women actually believe that their wedding was the perfect day with the rest admitting that there was at least one aspect of their big day that they would love to change. It would appear that despite the huge cost of many weddings and the amount of time spent planning them, most brides end up feeling that the results were less than perfect.

Sadly 38% of the brides surveyed said that they were unhappy with their wedding dress and would choose a different style if they had their time over again. This seems rather incredible given the amount of time most brides spend choosing their gown in the first place. I think that there is now so much choice that it is almost inevitable that you will see another one that you like more at some point! Also as fashions change most dresses are going to end up appearing to be a little dated when you look back.

The biggest gripe overall turned out to be the speeches with more than half of the brides surveyed saying that they wished they could have edited the best man’s speech. The main bone of contention here was inappropriate jokes so it could pay to have a word with the best man before the big day to offer some guidance as to what you find acceptable! Some brides even took exception to their father’s speech feeling that they had forgotten to thank the right people.

Over a third of the brides reported that they were unhappy with their hair and makeup on their wedding day, 30% were less than delighted with their photographer and one in six felt that their flowers could have been better. Almost a quarter believed that they didn’t have the perfect engagement ring and many of those whose fiancés had chosen the ring regretted that they had not been involved in the decision. Music was also a bone of contention with one sixth of brides unhappy with their choices here and one in ten even rueing the song selected for the first dance. Many brides also regretted their choice of attendants and after all the arguments I have witnessed this comes as no surprise!

Working in my bridal shop I saw many brides who I thought might end up having regrets about some of the things they were doing but I rarely saw people after the event and so I guess that I will never know! I am not sure that choosing to wear heavy duty work boots under a wedding dress was a great idea but one of my customers intended to do exactly that. I never did find out if she stuck to her plans but those boots wouldn’t have been very elegant!

I often wonder about my bride who was going to walk down the aisle to Metallica and another lady who chose an enormous and heavy wedding dress for a ceremony on a boat in Cyprus. Some things just don’t look like a great idea! At the end of the day there are so many elements to a wedding that there is almost bound to be something that you end up feeling you should have done differently. Ironically I think that one of the biggest regrets experienced by brides is probably worrying about everything too much rather than just enjoying the process.